The Court Of World Opinion - By John Scales Avery

27 July, 2014 In struggling against governmental injustice, both in South Africa and in India, Mahatma Gandhi firmly rejected the use of violence. He did so partly because of his experience as a lawyer. In carrying out non-violent protests against oppression, Gandhi was making a case before the jury of international public opinion. He thought that he had a better chance of succeeding if he and his followers were very clearly in the right. 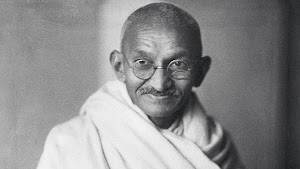 Furthermore, to the insidious argument that "the end justifies the means", Gandhi answered firmly: "They say that 'means are after all means'. I would say that 'means are after all everything'. As the means, so the end. Indeed, the Creator has given us limited power over means, none over end... The means may be likened to a seed, and the end to a tree; and there is the same inviolable connection between the means and the end as there is between the seed and the tree. Means and end are convertible terms in my philosophy of life."

Thus there are two elements in Gandhi's insistence on non-violent methods of resistance: Firstly , he and the resistance movements which he led were making a case in the court of world opinion; and secondly, the result achieved is always colored by the means that are used to achieve it. In South Africa, the fact that violence was not used to end the apartheid regime was chiefly responsible for achievement of lasting peace, and the avoidance of a blood-bath. In India, the former colony parted from the British Empire in a manner that was beneficial to both. India retained what was valuable in British culture.

We can remember from Richard Attenborough's splendid film of the life of Gandhi how important good reporting was to the success of India's non-violent resistance movement. Today, when the mainstream media are so thoroughly enslaved by our oligarchic governments, we might ask whether Ghandian methods of non-violent resistance can still succeed. Nevertheless, I believe that it is still worthwhile to make a clear case in the court of world opinion.

For example, I believe that the few ineffective rockets recently fired by Hamas were damaging to the Palestinian cause. They did no real harm to Israel, but they made the case far less clear. Israel, an apartheid regime far more evil than it South African counterpart ever was, justifies its genocidal atrocities by claiming that it "has a right to self-defense"; and the clarity of the situation is lost.

I believe that even in an era such as ours, where the mainstream media are so thoroughly failing us,
Gandhi's non-violence is still relevant.

John Avery received a B.Sc. in theoretical physics from MIT and an M.Sc. from the University of Chicago. He later studied theoretical chemistry at the University of London, and was awarded a Ph.D. there in 1965. He is now Lektor Emeritus, Associate Professor, at the Department of Chemistry, University of Copenhagen. Fellowships, memberships in societies: Since 1990 he has been the Contact Person in Denmark for Pugwash Conferences on Science and World Affairs. In 1995, this group received the Nobel Peace Prize for their efforts. He was the Member of the Danish Peace Commission of 1998. Technical Advisor, World Health Organization, Regional Office for Europe (1988- 1997). Chairman of the Danish Peace Academy, April 2004.http://www.fredsakademiet.dk/ordbog/aord/a220.htm. He can be reached at avery.john.s@gmail.com